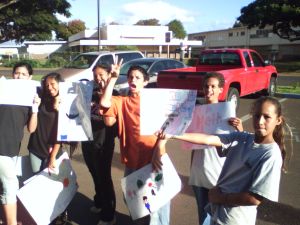 On November 20th, would you think it was weird that there may be at least 80 people outside Fort Weaver Road waiving these signs for some apparent reasons that are unknown because of the sign’s small little text? Not for these club members. Nothing would be weird about it. You’d see annually a large bunch of kids just being themselves, encouraging people to “honk your horn,” or they’d do a wave, shout out a unique slogan, and just being out-going and fun.

Usually all the club members would participate in the annual sign-waive for safety. Everyone was holding signs with drawings made by the younger kids in ways to be safe, and how to avoid drugs and drinking in front of the club on Fort Weaver Road. Many drivers were showing their support by honking of their horns, giving shakas in the air, and waving. Everyone was enjoying the day, in the very cool windy weather of the whole week.

Fellow photographer of the newspaper, Sloan Scharsch, contributed to my interview and said, “Improvements for the sign waiving would be much bigger signs or one big sign in front of the club to promote safety.” He added, “It will keep you stay in shape.”

This event lets the members draw and let their artful work be shown in public. It’s also good experience being out there to encourage drivers and people to be safe during the holiday season.

Boys & Girls Club membership gives children access to wonderful programs, caring staff and a safe learning environment for only $1 a year. Download and complete the application below MEMBERSHIP FORM If you have any further questions, please give us a call at (808)689-4182

What day is it?